Posted at 13:31h in History by POSP_@Dev16 0 Comments
0 Likes
Howard Martin Otho Travers was born in 1886 at Margate in Kent. He studied architecture at the Royal College of Art, then part of the V&A. His first significant employment was as an assistant to the brilliant late Victorian architect and church furnisher, Ninian, later Sir Ninian Comper. It is clear that Comper had a great influence on the young Martin Travers. In 1937 Travers made a very important introduction when he invited his friend John Betjeman to meet Comper at dinner. Betjeman went on to be an enthusiastic proponent and advocate of Comper’s work, later proposing him for a knighthood. Travers remained a life long friend of Betjeman who makes explicit reference to Travers in a poem entitled “Anglo-Catholic Congresses”. Verse two begins:
Yet under the Travers Baroque in a lime-washed whiteness
The fiddle-back vestments aglitter with morning rays….
Around 1911 Travers had set up in practice on his own, and despite the gothic influence of Comper began to develop a distinct leaning to the Baroque style. In the London area the most famous examples of his work are probably those at St Augustine’s Queen’s Gate, St Magnus the Martyr London Bridge and St Mary’s Bourne Street.
The earliest period of Travers’ work at St. Pancras Old Church dates from around 1925. He designed a trompe l’oeil tabernacle surround which can now be seen in the Walsingham Chapel beneath the tower. In 1947-8 he carried out a second program of work in the sanctuary where a plaster tympanum with dove relief was installed, together with a fine bas-relief of Our Lady. The inspiration for this conception can be found in the book of Revelation, chapter 12 Verse 1:
Now a great sign appeared in the heaven: a woman, adorned with the sun, standing on the moon and with the twelve stars on her head for a crown. 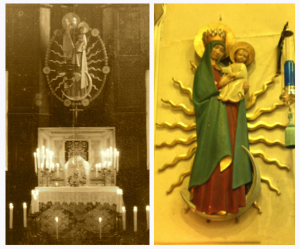 Around this time Travers was involved in restoration work at St. Mary’s in Northolt which was not completed, and it is probably that the design of our statue may have been intended for that church. A rood loft was also designed for St Pancras Old Church, but it was not installed.
Our statue apparently lacks part of its surround, but there is a very similar, more complete, image in the possession of the Community of the Resurrection.
There is a document in the St Pancras Old Church archives which suggests that this second phase of work may have been completed after Travers’ death in 1948.